When the Metropolitan Railway was extending out of London towards Aylesbury, one of the reasons given to justify the expansion was the potential of freight services that could be operated. Goods yards were provided at nearly all the stations north of Harrow to Verney Junction. In cooperation with the Great Central Railway and latter London North Eastern Railway and British Rail, quite a lot of freight was carried. Chesham sent quite a lot of manufactured goods and shoes to London by rail and Chalfont at one time had an oil depot by the station.

Taken on the day of a special running of the heritage 1938 stock, this view of Amersham station shows the NHBC offices and car park in the background (with houses further on) which now occupied the area of the old goods yard. The wide track bed on the right is the site of the former goods loop created when the line was electrified in 1960.  Today the car park has been extended and the NHBC office block replaced by a newer block.


Freight facilities lasted at Amersham into the 1960s and I have some memories of freight trains at Amersham. When the line was electrified a new freight siding was introduced at the far side of platform 1.

In addition to goods and freight, Amersham had a parcel service and as ate as the 1980s British Rail trains (often ordinary multiple units not in passenger use) would call to pick up and drop off newspapers and mail.

In the book "London's Metropolitan Railway" by Alan A Jackson (David & Charles - 1986) some interesting information is given about freight and goods at Amersham.

Much of the early freight carried by the Metropolitan was related to the building boom along the route of the line. Other freight traffic included milk and coal and there was quite a lot of paper sent to Aylesbury for the printers Hazel Watson and Viney. Interestingly, a minute from the 1930 Board meeting of the Metropolitan Railway notes that coal was being bored for near Great Missenden with "satisfactory results so far". Just imagine how things would have been if they had struck coal.

Picture Courtesy of Dave James, the freight shed taken in 1981

Interestingly, the goods shed surrounds seem to be a lot tidier in 1981 than they were in 1971 when the picture below was taken.

Picture Courtesy of Frank Phillipson, the freight shed taken in 1971

Total tonnage at Amersham had increased from 14704 in 1915 to 34331 in 1925 and necessitated two of the existing sidings and a cart road to be extended along with the shunting neck to accommodate 28 wagons. The sidings were on a hill which made shunting very difficult. When stabled, all wagons had to be secured.

A 1937 view of a freight train arriving at Amersham. The train will reverse into the refuge and then the trucks will be marshalled into the yard on the left. 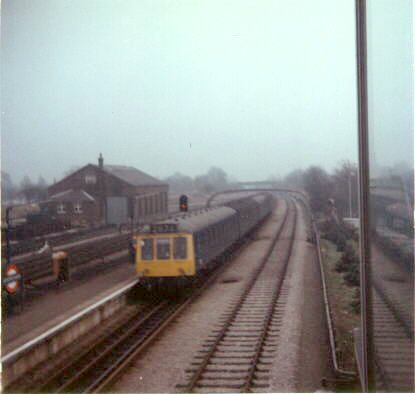 This picture taken from the signal box shows a British Rail D.M.U. bound for Aylesbury entering Amersham down road platform number 1 in 1969. Note the goods loop line still in place and the old goods shed in the background.

Although this page is not held on the amersham.org.uk domain, it is still part of the www.amersham.org.uk site. This web site is Copyright and operates a privacy policy
please also see disclaimer